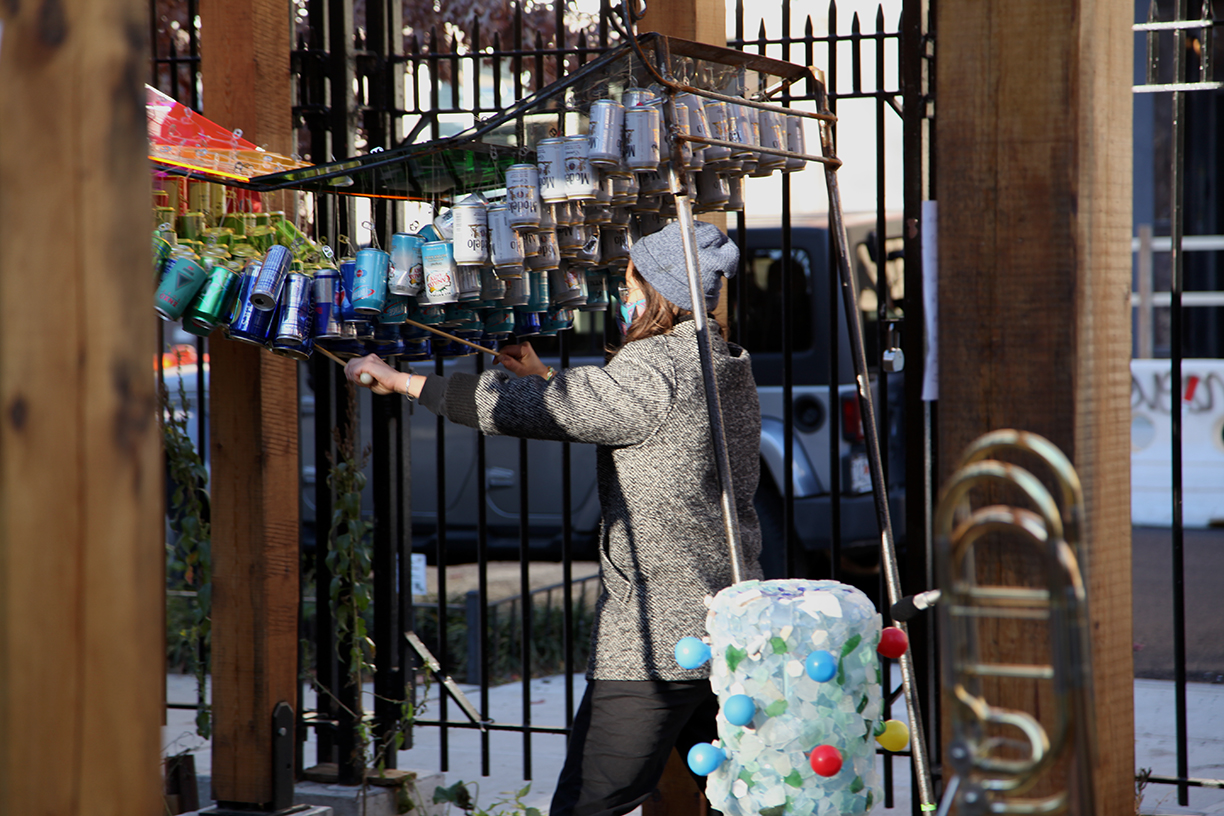 Ballad of Cyclic Change is inspired by the biogeochemical cycles and how they mirror cycles in human lives. We build acoustic kinetic sculptures from up-cycled everyday materials and create musical compositions using the sculptures as instruments. When the work is on display, the public is invited to play the sculptures to create their own compositions. By connecting human stories of transition to nature’s cycles we encourage people to feel connected to their planet, which we hope will inspire sustainable practices and help fight environmental racism .

Kathy Creutzburg is a public artist who uses the landscape to inspire her sculptures, mosaics, and paintings. Most recently, she collaborated on Whispers in the Grove, an interactive sculpture partially funded by LMCC 2019. In 2017, she completed two major projects for public spaces: a permanently installed steel sculpture in Raleigh, NC and a mural and mosaic project in Park Slope, Brooklyn. Her public sculptures, mosaics, and murals for PS 61M were permanently installed on site and restored by the NYC. School Construction Authority in 2014. She has exhibited sculptures in the “Figment Summer Long Sculpture Garden” for three consecutive years, sat on the jury for Figment’s “Pavilion of Dreams” international architecture competition, and created a piece for Figment’s 2018 Dream Bigger project. Creutzburg has had her work shown in a solo exhibit at Michael Mut Gallery and in the Brooklyn Children’s Museum in New York City, as well as numerous group shows at Station Independent Gallery and Chashama Gala. She works as a teaching artist for Studio in a School, where she has been engaging youth, parents, teachers, administrators for twenty years.

Mirabai Kwan Yin’s creative interests lie in collaborative multimedia art that incorporates textile and upcycled materials. In 2019 she was an LMCC grantee along with Kathy Creutzburg for “Whispers in the Grove” a multimedia sculpture including upcycling, sculpture, light, poetry and music. For seven consecutive years Mirabai has led a team to envision and build large, multimedia, collaborative, interactive, public art pieces as part of Figment Art Festival. Several of those pieces went on to be displayed in Sam and Sadie Koenig Community Garden in the East Village and at Chashama’s sculpture garden at their artist residency, ChaNorth, near Rhinebeck, NY. Mirabai has also collaborated with Kathy Creutzburg to create and display a sculpture for Chashama’s annual gala in 2017, now displayed at ChaNorth’s sculpture garden. She is also a fashion designer and has designed for brands including Phelan, VPL and Vena Cava, including a dress that was part of MOMA’s “Items: Is Fashion Modern?” exhibition in 2017.

Jacob Elkin is a musician, composer and educator based in NYC. Through the integration of space, noise and microtonality, his compositions seek an abstract expression of contemporary concerns. His compositions have been heard around the world including recent performances in Moscow, London and Bucharest. Mr. Elkin is on faculty as brass instructor at the United Nations International School.