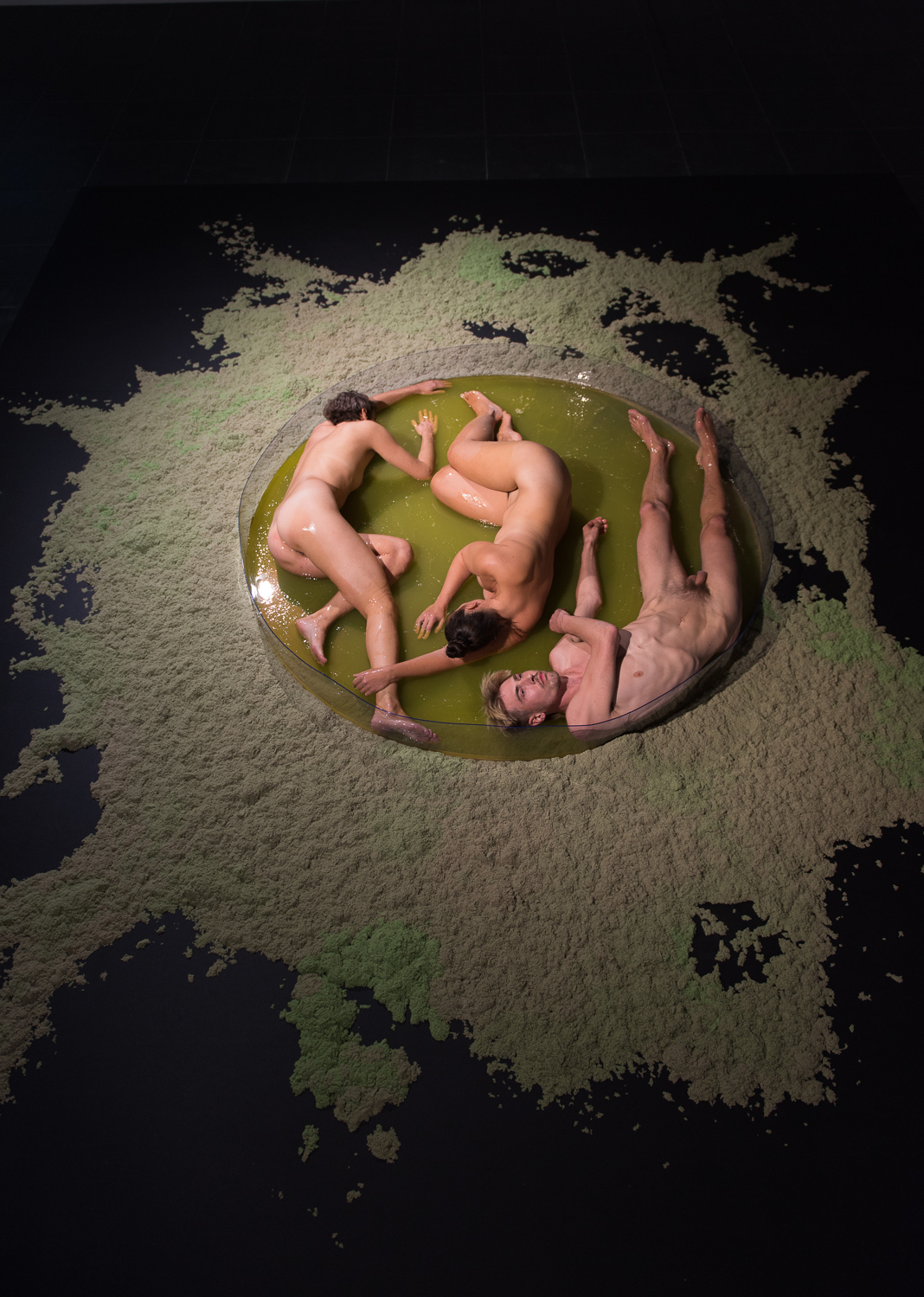 Expanded Self visualizes the invisible surface of the human body in a unique way. A gigantic petri dish is used as canvas and the bacteria living on an individual body as colour.
The human body is a tiny particle in a living, pulsating, ever-expanding entanglement of multi-being. We are only beginning to understand how this astonishing community of different life forms works in and on us and allows us to work as equals.

microbial entanglement – in vitro breakout
How can an imaginary world facilitate a radically new view on biological rules, hierarchies, interactions, dimensions and scales?
In science, in vitro refers to experiments conducted in a controlled artificial environment outside a living organism, such as a petri dish. A living being cannot be reduced to its DNA, its exploration of social relationships requires, among other things, an artistic and philosophical extension of scientific tools.

Sonja Bäumel is an Austrian artist, independent researcher and art educator based in Amsterdam, Netherlands and Vienna, Austria.

Her artistic research explores ‘the living’, the evolving perception of what bodies are made of. She investigates the influence scientific knowledge has had on the way we have perceived and interpreted the human body historically and how this affects current society and the cultural contexts in which we act. Sonja uses self-experimentation to question skin as a border of the human body, taking risks by engaging directly with the material and by seeking the points where the environment starts and ends. These spaces in-between are vivid entanglements full of life. They annul trans-species boundaries, revealing as yet unexplored forms of intelligence and communication.

Most of her projects involve long-term collaborations and extensive fieldwork. She creates process-driven, trans-disciplinary and imaginary, yet tangible microbial landscapes such as living paintings, sculptures, rituals, installations and performances intending to sense and thus better understand what the microbial paradigm shift means for the limits of the self and the relation between self-interest and collective behaviour.

At the moment, Sonja works as tutor and head of the Jewellery-Linking Bodies Department at the Gerrit Rietveld Academie in Amsterdam, as well as lecturing and holding workshops at different national and international academies and universities.
She studied Fashion Design at the Fashion Institute in Vienna, and holds a Bachelor in Arts from the University of Arts in Linz, as well as a Master in Conceptual Design in Context from the Design Academy in Eindhoven. In 2012, she was awarded the Outstanding Artist Award for the Project Textile Anatomy by the BMUKK Federal Ministry of Education, Art and Culture in Vienna.

Her work has been exhibited internationally at the Ars Electronica Center, the Anthology Film Archives New York, the MAK Museum of Applied Arts, the Museum of Contemporary Art in Taipei, the Museum of Natural History in Vienna, the ZKM Center for Art and Media or the Centre Pompidou Paris. Her projects have also provided the basic impact for documentary films (e.g. BioArt – Kunst aus dem Labor, ORF/ARTE), to which she actively contributed. She is a co-founder of the Dunbar’s Number collective (since 2011), a member of the Pavillion35 (since 2012) collective, based in Vienna, and of the WNDRLUST (2013-2018) collective, based in Amsterdam